The Harford County Electrical Apprenticeship program’s first-ever virtual graduation took place on Friday, May 7. The graduation ceremony celebrated seventy-eight 2020 graduates and eighty-nine 2021 graduates, the two largest classes to date. The virtual event included remarks from Tiffany P. Robinson, Esq., Secretary, Maryland Department of Labor and Dr. Theresa B. Felder, President, Harford Community College, who spoke to the unique challenges due to the Covid-19 pandemic that both the classes of 2020 and 2021 overcame. Additionally, the dedication, perseverance and hard work required of the apprentices was recognized, as well as the support of and sacrifices made by their families and friends. JeanMarie Lewis, Executive Director; Ronald Blaney, Training Director, and Peggy Howard, Apprenticeship Coordinator, also contributed remarks on their appreciation for the classes of 2020 and 2021 and their accomplishments despite the challenges of virtual learning from March of 2020 through most of the 2021 school year.

The apprenticeship school, which is housed at Harford Community College’s Edgewood Hall, typically graduates approximately 60 to 80 students each year. Since 1982, 1,928 apprentices have graduated from this program. They anticipate another 100+ new enrollments for the fall of 2021.

The Harford County Electrical Contractors Association (HCECA) was formed as an official group in 1941. In 1978, the organization was restructured and over the next few years it became one of the largest electrical apprenticeship programs in the state of Maryland.  The Contractors Association organized their members, worked with local and state agencies, hired educational consultants, and formed a long-term academic partnership with Harford Community College, thus ensuring the stability and growth of the trade. With this partnership all graduates, upon completion of their apprenticeship with HCECA, are eligible to receive 21 college credits toward an A.A.S. degree in Technical/Professional Studies, Business Management concentration or 19 credit hours toward an A.A. degree in General Studies.

The apprenticeship program includes four years of classroom instruction, in accordance with state and federal regulations. The classes begin in September and run through April each year, which meets the required 144 hours of related classroom instruction per year. Students are thoroughly trained in residential, commercial and industrial wiring, blueprint reading and the National Electrical Code for a total of 576 classroom hours over the four years. In addition, apprentices must acquire 8,000 hours of on-the-job training. Upon completion, each student is issued a State of Maryland Certificate of Completion, identifying the student as a qualified journeyperson electrician.

For more information on the Harford County Electrical Contractors Apprenticeship Program, please visit hcecamd.org, email [email protected] or call 443-412-2800. The deadline to apply for fall classes is May 31, 2021. 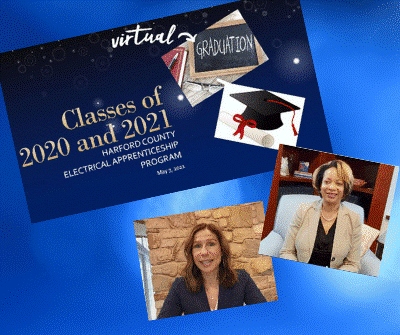 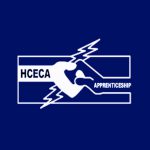 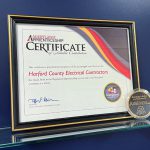 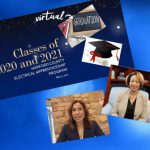 Read More »
Back To Top